Community Building in the Asia-Pacific: Diverging or Converging Views?

The Asia-Pacific region envisions the building of a “dynamic and harmonious community”. At the heart of a community is holding something in common – common views, values, beliefs, and direction. Do such shared views exist in the region? If not, what are the divergences?

The Pacific Economic Cooperation Council (PECC) has conducted the State of the Region surveys since 2006, asking the views of opinion-leaders from more than 24 economies in the Asia-Pacific region. Two questions, on short-term economic outlook and regional economic integration, are chosen specifically to examine the region’s views on important economic issues.

To quantify the divergence in views, the coefficient of variation is used. It is a percentage derived from dividing the standard deviation by the mean.

The advantage of using this over standard deviation is that it is independent of the mean. There are two crucial findings. Firstly, the highest level of divergence in views is on the issue of the WTO Doha Development Agenda (DDA).  The second finding is that, the variation in views on regional economic integration is higher than that on short-term economic outlook. A summary of the coefficients of variation is presented in the chart. 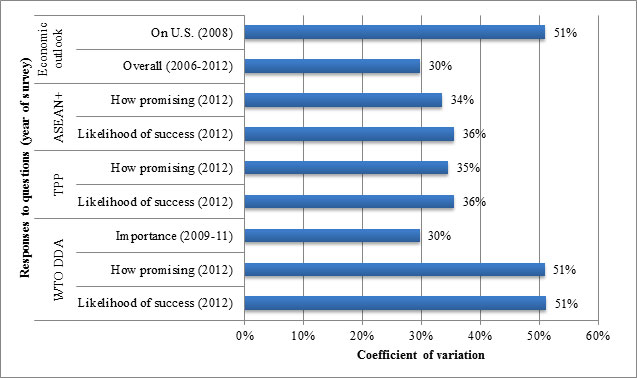 Diverging Views on the WTO DDA

Opinion-leaders were asked to evaluate the likelihood of success and how promising different initiatives were as pathways to a Free Trade Area of the Asia-Pacific (FTAAP). The highest level of divergence in opinions was on the DDA. The average coefficient of variation was 51%, around 15% higher than that of the other initiatives: the Trans-Pacific Partnership and ASEAN-Plus agreements, including ASEAN+3, Regional Comprehensive Economic Partnership, and Comprehensive Economic Partnership for East Asia (see chart).

Throughout the six years of the PECC survey, this level of divergence has only been matched at one other time and one other issue. In 2008, as the global financial crisis was just unfolding, there were significant widespread debates about the impact of the sub-prime crisis on the US economy. Views on the US economy among PECC panelists were equally divergent, with a coefficient of variation of 51%.

One interesting finding sheds light on a credible approach to advance the DDA: there is less divergence in opinions on the importance of the DDA, than its likelihood of success and how promising. When asked about its importance in stimulating growth in Asia-Pacific region from 2009 to 2011, the coefficient of variation is significantly 20% lower, at 31% (see chart). Reinforcing the consensus on the DDA’s conceptual idea and importance may reorient economies to restart stalled discussions. Perhaps the negotiations have become victims of the endless horse-trading or lack thereof, rather than focusing on what the potential benefits would be.

Most importantly, the divergent views on the DDA should not necessarily be a pessimistic sign. It simply means that there is a mixture of very extreme views, including some very positive and supportive views. The high level of divergence should instead be seen as an encouragement, as the DDA has not yet been doomed to failure. Despite the widespread pessimism, it is still possible for leaders to swing the pendulum back to the positive direction. As Margaret Mead, the celebrated cultural anthropologist once said, "Never doubt that a small group of thoughtful, committed people can change the world. Indeed, it is the only thing that ever has." That there remains a group in the region willing to pursue the DDA leaves the door open to an effort to restart the negotiations and find common ground.

One possible suggestion to diminish the divergences is fostering a more open dialogue with different levels of society. There could be more media coverage and publication of information in this area, to keep more participants in society informed. Instead of continuing to use the current top-down approach to progress, a bottom-up approach – building a consensual view in the civil society - may be adopted.

In the two questions of the PECC survey examined, there are more divergences on issues of regional economic integration, than on short-term economic outlook. This points to the need to foster a more consensual view on regional economic integration across sectors. In particular, WTO DDA has a level of divergence comparable to that of the United States’ outlook in 2008. On the bright side, there is relative convergence on the DDA’s importance. Most importantly, the high level of divergence on the DDA has positive implications. There are still respondents believing in the DDA being very likely to succeed and very promising. If the region could demonstrate united leadership in bringing the DDA to succeed, it may still be possible. The road to building an Asia-Pacific community is long. But diminishing the divergences and seeing them in a new light could bring the region one step closer to an Asia-Pacific Community.